Let me tell you a story about a client I once had.

They’re an e-commerce-based SaaS company that hired me for consulting last December.

I worked mostly with the Senior Marketing Manager, and the main focus of our work was to improve the copy and layout of their landing pages so they could reduce their bounce rates and get more trial signups.

We also worked on their funnel, producing a handful of case studies featuring pre-existing clients.

They had an incredible product, and anyone selling and shipping things from an online store could save at least 8-10 hours of solid work per week, which is quite significant.

The only problem was, they said they wanted to make changes to their landing pages, but when it actually came down to testing some different versions, they were never willing to stray too far from their pre-existing layout and copy that clearly wasn’t working.

They didn’t want to experiment with buyer emotion, for example. It made them uncomfortable.

(Hint: you should always experiment with emotion. People use data only to justify their decision to buy, which is based on emotions. So while you need data, it shouldn’t be your copy’s main driver.)

And even though it’s been statistically proven over and over again that visitors convert better if they’re only given one call to action (one type of action, not just one button), they insisted on multiple offerings on every single page.

It was impossible to get past these things with them, and I eventually had to end our working relationship. Unfortunately, before they were able to reverse their bounce rates at the scale they wanted.

They were missing their chances of reducing those bounce rates only because they weren’t willing to take some seemingly risky shots and put themselves out there.

Because while a shift on your landing page might seem risky?

Clearly the bigger risk is to stay glued to something that doesn’t work.

So, let’s be real for a second. Bounce rates.

They happen despite our hardest work and our best intentions.

It’s just the nature of the beast that is the internet.

A lot of times, we don’t even like to think about them because we know that a bounce is exactly equal to the loss of the lifetime value of a customer. And that’s a lot of money.

Then we try X, Y, and Z and realize that lowering bounce rates is freaking hard. (Like, even harder than remembering those stupid math formulas in high school.)

So when our bounce rates continue to be unreasonably stubborn and NOT reduce even the slightest bit, we get frustrated.

So frustrated that we almost have to forget the bounce rates and focus on other things just to keep our sanity.

I think we’ve all got higher bounce rates than we’d like.

It’s something we hate to admit because it makes us feel like we’re failing in some way, but I think the better solution is just to join hands to fight this monster for all he’s worth. Strength in numbers, you know?

Because when we reduce our bounce rates, it does a lot more than give us nice-looking numbers to show off. You know what else it does?

It get us more customers. Which makes us more money. (Significantly more money.)

And more money is a beautiful, beautiful thing.

So I’ve put together a weapon for you. A weapon in the form of a 32-page ebook that’ll help you slay your own high-bounce-rate dragon. 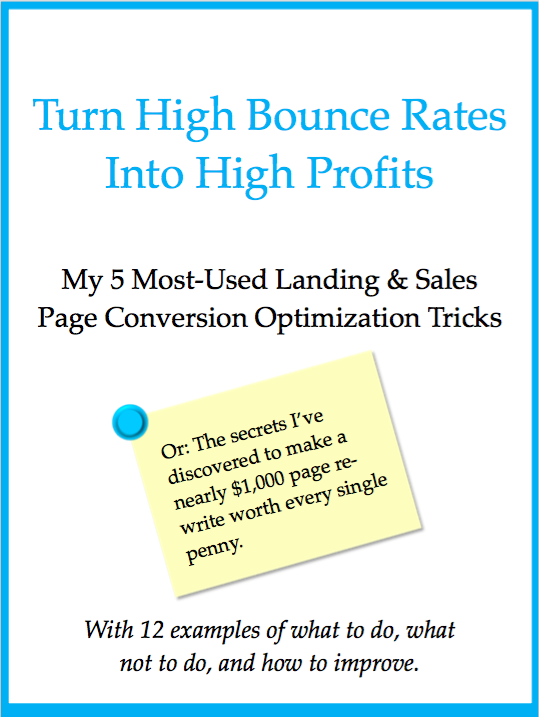 I think the front page is pretty self-explanatory.

It’s 32 pages of the best (and easiest) ways I’ve found to keep people scrolling down your page and actually clicking on your call to action button. And it’s full of examples from all over the web to give you bits of inspiration and instruction for your own home and landing pages.

The best part is, none of them require any major or fundamental design changes, so they’re things you can implement and test rather quickly.

Just tell me which email address to send it to: